How to build and host a NuGet package using VS2017 and .NET Standard in VSTS

Creating a NuGet package in Visual Studio 2017 and getting it to build/deploy to Visual Studio Team Services was more difficult than I expected. Here’s how I did it.

I’m deprecating this post :) I’ve pretty much re-written this post to make use of the latest VSTS functionality and to support both .NET Standard 2 and .NET Core 2. Check it out!

Package management in VSTS is free for up to 5 users. To get this functionality you first have to enable the trial. If you have 5 or less users you won’t be charged.

I had a small library, written in .NET Core. I wanted to re-use this library in another project so I decided to create a NuGet package.

The code was had no dependencies (it’s relatively simple) so it was a perfect candidate for .NET Standard. Continuing to use .NET Core would have been fine as well.

In my solution, I would also include the relevant xUnit tests as an additional project.

It looked something like this (except with more files) 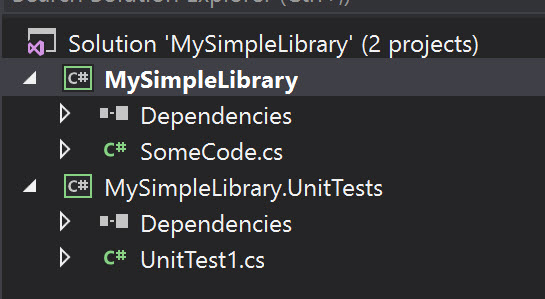 Lastly, I wanted to setup the build & deploy to the package feed within Visual Studio Team Services (VSTS).

Once I started setting up VSTS I realized I had a bunch of problems.

With my NuGet package it’s important that the version number increments. It cannot exist already and we can’t go backwards.

In Visual Studio 2017, when you create a .NET Core or a .NET Standard library, there is no AssemblyInfo.cs file. The version information is instead kept within the csproj.

There are many add-ons for VSTS that allow you to change the details in AssemblyInfo but these wouldn’t work. What do I do??

Here’s what the csproj XML looks like. Note that if you leave the version at 1.0.0, it won’t display the version tag.

Problem 3: What version would I use?

In theory we have four components of the version number: major.minor[.build[.revision]]. For example: 12.4.30.2

Where would I get the major and minor versions?

The build number could come but VSTS but what exactly would I use?

VSTS can provide the build number but how I get it?

The NuGet Packager item in VSTS wasn’t working. I forget the details but suffice to say I couldn’t get it to work.

Here’s what I did to get it all working.

In VS2017, I went into the project properties, Package settings and set the following:

I had to create a package feed by going into:

I added the following file to my project. A few key things:

At a high level I created a build process as follows:

I also added some configuration in the build process

I added two variables – for the major and minor versions. I will set this manually going forward. The build does not increment these.

Under options I entered the following Build number format

This value is great for me, in VSTS, to see all my builds but it’s no good for an actual version number as the date is too long. I also needed something unique.

I also set the Default agent queue to Hosted VS2017

Nothing fancy about this. I just called the restore command.

I originally forgot to do this and was getting all sorts of errors, saying it was missing basic things like System.Date.

Powershell script to set the csproj

Remember how I added the ps1 file to the root of my project? Here’s how I would use it.

Note that I could have added this code directly in VSTS but, by having the ps1 file in source, I can manage it using source control

Assuming my project was called MySimpleLibrary, here’s how it would be configured:

Note: I couldn’t just pass the revision number variable $(Rev:.r) as a parameter here. It wouldn’t let me use it here. That’s why I passed the ENTIRE build number and then parsed it. If you want a different build number format (i.e. you want to add the build name or branch name), it’s just a matter of tweaking the Powershell script. I’m pretty sure I could have passed the major and minor versions as separate variables to my script.

This is standard. The only changes are:

It worked! The package builds and deploys successfully. All I had to do was add the package feed URL within Visual Studio.